I’m going to be finishing up this regular blog and inviting members of the LSM development circles and congregations to start posting and sharing their experiences here. We want to hear from you! I thought I’d end with a story. It sums up the adventure of discovery I have been on since I started the circle, and the power of spirit in our lives.

A trip to Bruges

I found myself plunged in a very busy week at work. I had no complaints. I was taking people around to see exquisite Flemish art of the Northern Renaissance accompanied by an art historian. We were staying at a luxuriant hotel in the beautiful and historic Belgian town of Ghent. There was no time for meditation in the blur of days and sumptuous dinners and certainly no time to ponder the things of spirit. Or so I thought. In fact, it was staring me right in the face, because when you think about it, I was looking at an awful lot of religious art, some of the most beautiful and mysterious religious art in the world for that matter. For example, Van Eyck’s the Adoration of the Mystic Lamb – the famous 15th century altarpiece in Ghent cathedral – is regarded as one of the most enigmatic paintings of all time. It has ‘mystified’ art historians for centuries. They do not quite know what it means although they know it has significance way beyond traditional Christian thought. It is regarded as a mystical or visionary painting, influenced by secret teachings, arcane ideas and mediaeval gnosticism.

Adoration of the Mystic Lamb 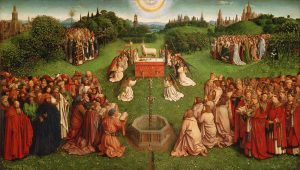 The ‘spirit’, and the ‘Holy Spirit’, hovering above the mystic lamb, play a large part in the picture, whatever you make of it. And the circle around the dove looks suspiciously like a prism or rainbow effect of light. As it wasn’t the first time I had seen it, I didn’t linger on it for too long this time, more concerned with organising various practical issues of the tour. I let the academic do her thing and tell the group about the painting in strictly academic terms. But ‘spirit’ it seems, had other plans for me and was trying to tell me to pay attention. Who knows why? Perhaps so I can write this here and show you the paintings in turn.

The next day was a case in point. The group and I were in Bruges to see more beautiful art by Hans Memling, another Flemish master painter of the 15th century. As I walked into the museum I was confronted by a light effect on the wall, a glorious prism of colour created by the sun shining through the building’s window panes. For those of you who have followed this blog, you will know about the rainbow colours I have experienced in the development circle and the sense of otherworldliness they have for me, as if they are from some higher frequency and vibration. When I first experienced them I had been moved to explore them on the internet, and soon came across a depiction of the Tibetan rainbow body, a specific Buddhist teaching and phenomenon when a master is able to manifests his light body as a rainbow, to become pure light and to merge with the heavenly realms. He becomes his very own portal.

And here is the photo I took in Bruges of the rainbow effect on the wall that day: 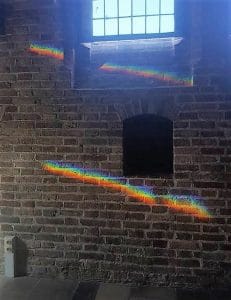 A pretty effect, sure, but at this point, I was not going to give it any special significance in relation to my experiences. As far as I was concerned it was a nice coincidence.

But then the academic walked up to a painting in the museum. Now I was confronted with the mother of all rainbow depictions just a few minutes after seeing the above. This time the rainbow was depicted as the outer edge of the heavens, in a vision of the apocalypse, by Hans Memling. A shiver went up my spine. I felt as if I was being alerted to the significance of the rainbow and its place in our relationship with spirit and energy bodies. It was uncanny. My body was pulsing as I looked at the image. I was being jolted into awareness: “Look, it was saying, look and pay proper attention”.

I thought back to what I had experienced of the London Spiritual Mission when I had first walked through its doors to come to the development circle. I knew I was in a special place, where the love and energy was able to come through, where we could touch spirit. And to quote Leonard Cohen, we ourselves and our energy bodies were how “the light gets in…”, the bridge between heaven earth, the gnostic sacred marriage no less.

Here is the picture of Memling painting in Bruges I saw, with the heavenly rainbows, called The Saint John Altarpiece: 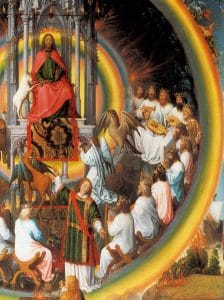 This photo does not do the original justice nor the extraordinary sense I would get of being permeated by the kaleidoscopic hues, the indescribable waves of colour-bliss and beauty I had felt at times when sitting in the circle, (and describe in earlier posts in this blog), but still you can get a sense of it just by looking at this painting.

I now looked with new eyes at all the paintings I saw during this 4-day pit-stop of glorious religious art. It was clear these painters knew things that they were not necessarily letting on in the titles. You just had to have the ability recognise it, a bit like sensing and recognising the world of spirit.

But while I appreciated the art I was seeing in a particularly deep way now, because of my own felt experience of the spiritual world, I was still reluctant at this point to see these experiences in Belgium as a ‘sign’. It wasn’t that I was sceptical, I just found that people gave themselves a sense of self-importance by seeing everything as some kind of special and personal sign from spirit to them. It was done too readily and quickly. It was enough for me that this coincidental experience made me reflect upon the rainbow light and body again. And seeing the pictures did herald its return in the weeks to come, when I was sitting quietly in reflection, or in half-sleep states. It was like a long-lost friend forced to disappear during the summer when I had been so busy and pre-occupied with the ‘world’. Now It was emphatically back.

But this story has a little more fairy dust than that, because I did get to the end of the rainbow. You know how they say things always come in threes? It was with genuine amazement that I stared down at this third example on the final day of the tour, on the floor of a church: 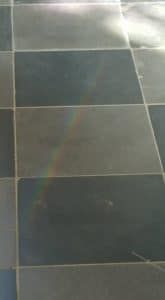